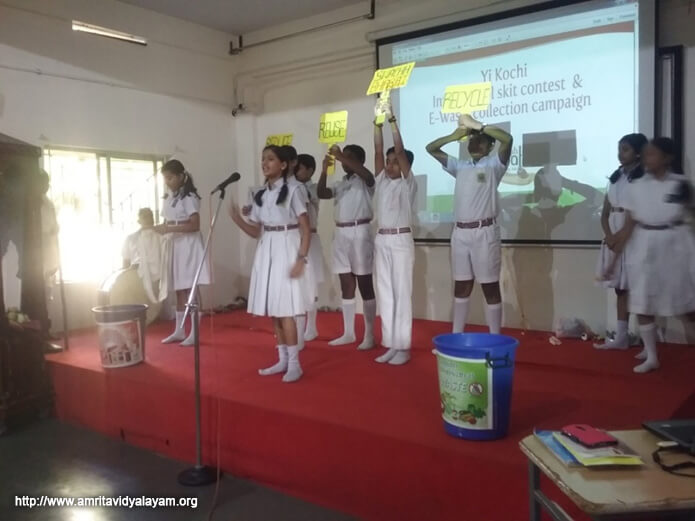 Yi Kochi Interschool Skit Contest and E-Waste Collection Campaign was organised by Wonderla at Vyttila Hub in February 2017. The skit presented by Amrita Vidyalayam, Ernakulam won First Prize in the contest, with a trophy and a cash prize of Rs.10,000. The school was also awarded the title, Kochi Swachh Bharat Vidyalaya 2017!! The participants in the skit were Keerthana G.J., Ayush Yadav, Keshav Biju and Shashank Sathish of VIA, Nirmayi D. Pillai, Varsha J. and Sanjana Sudheer of VIB, Samhita B.G. of VIIA, and Tarun Sudheer and Adithya R. Nair of VIIB.

As per the directions of MHRD regarding reducing the weight of school bags, Amrita Vidyalayam schools are restricting the subjects for Standards 1 and 2 to English, Mathematics, and second and third languages. Standards 3 to 5 will have EVS in addition to the above subjects.

Your application has been successfully submitted. Thank you for applying to Amrita Vidyalayam, Kochi.

Our administrative executive will contact you back at the earliest.